Traditionally, FAST groups bring families together for meals and bonding through education-focused activities. During the pandemic, many have adapted to a virtual format.

In a later interview about his comments to the Joint Economic Committee, he said, “When parents are invested through hiring, fundraisers, and curricular issues in such programs—issues with concrete consequences for the well-being and education of their children—they will get involved.” Their involvement, in turn, can lead to new friendships and contacts, information sharing, and mutual aid.

Small also found that New York City public programs, such as Head Start and the state’s pre-K curriculum—which mandated such involvement opportunities for parents—were particularly strong at building social capital and enabling parents to help themselves, each other, and their child’s center.

Now an important new study confirms that helping parents form strong bonds with each other is a critical aspect of family engagement and may improve educational opportunities for children and youth. The research focuses on Family and Schools Together (FAST)—an afterschool program that involves entire families in group activities designed to foster connections between parents.

“Providing opportunities to interact and facilitating interactions in these settings may allow parents to more fully recognize their shared interests and develop relationships that support their children’s educational success,” wrote the team of researchers from Brown University, Mathematica, and the William T. Grant Foundation. The study appears in the American Educational Research Journal.

Rethinking family-focused school events may be especially important for low-income minority parents, who often feel alienated from traditional structures such as the PTA and other parent-teacher organizations. Events such as student performances also attract parents to the school, but they might not allow for the kind of interaction that builds trusting relationships.

“Thus, an important first step is for schools to offer events throughout the school year that bring parents together regularly and allow for repeated and sustained interaction,” the authors reported.

They noted that without structured opportunities for families to form relationships, the benefits of networking might be limited to only the most outgoing parents. That was the inspiration for Kindred, a District of Columbia nonprofit that GFRP featured in 2019. According to that article, “Evaluations of Kindred’s work show that the bonds being formed at partner schools among parents from different racial, ethnic, and socioeconomic groups are leading to greater empathy, parent efficacy, and access to resources, and that parents are changing the way they behave with one another and influence the school.” 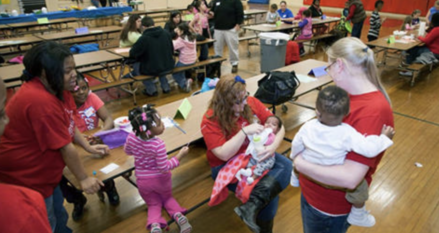 The new study builds on earlier research that identified four ways that FAST builds social capital among Latinx parents: responsive communication, reciprocal communication, shared experiences, and the links between parents and a school or community agency.

The research is part of a growing effort to strengthen relationships between Latinx parents and schools and with each other. For example, Teachers and Parents as Partners, a project of the Nebraska Center for Research on Children, Youth, Families and Schools, gives parents a structured process for supporting their children but also identifies the contributions that parents bring to their children’s education.

Another program, the Mexican-American Legal Defense Fund’s Parent School Partnership (PSP), operates in Los Angeles and Atlanta to give parents the skills to make improvements in their schools. A 2011 study showed the program increased parents’ knowledge of their children’s school system. Parents developed social capital through trust, understanding norms related to interacting with public officials, and knowing how to access information to make decisions.

“The PSP program fostered the development of social and intellectual capital, which increased parents’ ability to have an impact in their children’s education, which, in turn, is an essential element of parent empowerment,” the 2011 study noted.

Speeding up the Process

The FAST model includes eight weekly meetings, or FAST nights, that usually feature a meal, some family games, and other activities that allow for parents and children to interact with each other. Then, over a two-year period, parents continue to lead meetings, allowing relationships to grow deeper over time. Local FAST teams, made up of parents, teachers, and other school staff members, schedule gatherings to meet the needs of the families involved. If parents can’t attend after school, for example, the meetings can be held in the evening and include dinner—or even on the weekends.

Like other family engagement efforts, FAST programs have also adapted to maintain connections with parents and children throughout the pandemic and created a virtual “FAST at Home” version that includes Zoom gatherings and interaction through Facebook. A team in Nebraska, for example, assembled “special play” boxes to drop off to families’ homes. 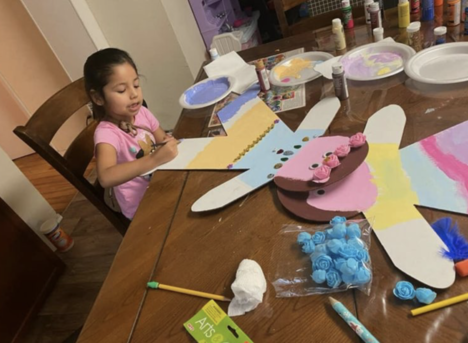 A San Antonio student works with materials that FAST team members delivered to her home during the pandemic.

For the study, which focused on the in-person setting, researchers used both interviews and surveys to collect data over the three-year period of the program. They were able to gather rich responses from parents on what it takes to form close connections with other families. They found, for example, that parents often initiate relationships and that sometimes children make the introductions. Schools can help by offering resource rooms or other designated areas where parents can interact, the authors wrote. But they also indicated that for all the talk of parent involvement and engagement among education leaders, “most social ties formed as a result of parent efforts and not the school facilitating these connections.”

Comparing the FAST and non-FAST schools, the researchers learned that while parent networks grew in all schools, they formed at a quicker pace in FAST schools. This finding, they wrote, suggests that the FAST nights and other gatherings were able to “speed up what appears to be a typically unfolding process.”

In the interviews, parents also identified what they considered to be elements of quality relationships with other parents—trustworthiness, expressions of care and respect, and reciprocity. The results showed that the quality of relationships between parents was higher in FAST schools during the first year and remained stronger over the three years than in the comparison schools. One cautionary finding, however, was that quality leveled off once the weekly FAST nights were over.

The FAST study is unique in that it follows a parent engagement intervention over time, showing that while the program provided early opportunities for parents to connect, networks will likely need ongoing support in order for those connections to strengthen. The study showed, according to the researchers, that “FAST creates a collective experience in the school setting that builds solidarity among parents, around the shared identity of being ‘FAST parents,’ and helps them see themselves as part of a larger collective.”

The authors, however, also recommended practices that any school could incorporate, such as creating places for parents to congregate during pickup and drop-off times and setting aside time at students’ performances for parents to introduce themselves to each other and perhaps respond to a discussion question.

Overall, the differences between FAST and non-FAST schools were not large, but the researchers concluded that “even a small improvement in network quality may provide important resources for parents otherwise lacking school-based relationships, and meeting parents sooner may be beneficial in low-income Latinx communities where educational inequalities surface early and grow over time.”

As schools grow more racially diverse, D.C. nonprofit Kindred gives parents a place to tackle bias and be equal partners in improving opportunities for all students.

We want to hear from you! Share your family engagement strategies via this short survey #FamEngage https://t.co/w5Al5detP1

RT @When_You_Wonder: Thank you to all the #moms — those who are with us and those who aren't — who saw our potential and helped us become w…