As schools grow more racially diverse, D.C. nonprofit Kindred gives parents a place to tackle bias and be equal partners in improving opportunities for all students.

“I haven’t always felt empowered in spaces where white people are the authority,” Mike Dixon, a parent of two elementary-school children at Washington Yu Ying Public Charter School said recently while speaking at a hearing of the Council of the District of Columbia Committee on Education. “Schools have been set up in such a way that [assumes] we [black people] should just be happy with what we get.”

But then he found Kindred—or as Dixon likes to describe it, Kindred found him.

A nonprofit organization in Washington, D.C., Kindred is based on the belief that parents, working in partnership with school staff and leaders, are necessary to create learning environments where all students thrive.

“Trillions of dollars have been invested in addressing what has often been called the ‘achievement gap’ without co-designing solutions with families furthest from opportunity. This is the equivalent of designing a glove using only the measurements of a foot. It just won’t fit,” describes Kindred founder and executive director Laura Wilson Phelan.

Parents of color, like Dixon, have been systematically left out of the process of co-designing schools and school systems’ approaches to policy, culture, and learning. Efforts to engage families typically include school-driven efforts such as parent-teacher conferences and report cards sent home that assume information should be unidirectional, with the school as the “expert” and the parent as the “service recipient.”

“We haven’t done the work to unpack systems that oppress black and brown people,” Dixon says. “So it isn’t a surprise that this plays out in our schools and is reflected in our test scores.”

Research shows that parents are a necessary element in turning around struggling schools—as necessary as school leaders. The consequences of an approach to family engagement that fails to invite all parents in as partners in the education of their children are exacerbated in schools with diverse student bodies. Parents from privileged backgrounds who feel comfortable and even entitled to share their opinions with the school overpower the voices of families who have been historically marginalized by our systems. Policies, practices, and spending thus get molded by the families who have been advantaged by our systems because of their skin color, social status, or socioeconomic status.

For all families to equitably access a school’s resources and shape the school’s policies and practices so that they reflect the culture and values of the students they serve, families need to understand how our nation’s policies and practices, as well as the interpersonal behaviors that reflect those policies, have gotten us to a state where a child’s race and income level can statistically predict life outcomes. This awareness can only come about when parents form relationships with each other, share their stories, and delve into difficult and uncomfortable conversations about race and racism.

“Kindred isn’t telling us what to do. This is the difference for me,” Dixon told the education committee. “Kindred has helped me shift my perception from schools being an authority to a place where I should expect services that meet the needs of my children.”

And that, he said, could not have happened without the relationships he has formed with other parents through Kindred, where hearing the stories of other families spurred deeper reflection within Dixon about his engagement with his children’s school.

Now in 13 elementary schools, Kindred and the parents who have become part of the organization’s network in these schools are tackling opportunity differences and working to ensure that all students receive the services and support they need to succeed. 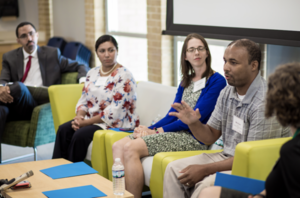 “On the same wavelength”

Kindred’s three-year model begins with Kindred facilitating dialogue groups made up of parents who truly represent the demographics of the school. Over a 10-week period in year one, parents build trust with one another and explore how their socialization guides their behaviors and expectations of themselves, each other, their children, and the school. Parents then decide on a course of action that addresses the inequities they experience in their children’s school. Examples include improving the way the school attracts and retains teachers and leaders of color, forming affinity spaces for parents of color to process their experiences and identify solutions, and improving the way parents are mobilized to connect with and share information with other parents in their children’s classrooms as ambassadors of learning and collective well-being.

In years two and three, original Kindred participants begin to facilitate their own groups, thereby growing the force of parents committed to creating equity and interrupting racism. They organize into a structure, such as an equity committee, to coordinate their work and collaborate with school staff and leaders. These leaders who recognize and want to change the way racial oppression has contributed to opportunity differences—but know they can’t do it without parents—are critical partners in creating schools that truly provide equitable opportunity.

“I now have a diverse set of parents that are on the same wavelength,” Katie Lundgren, the principal of Kindred’s pilot site, Marie Reed Elementary School, said during an event in which Kindred released the results of an external evaluation. Kindred, she said, has “unleashed a set of voices that has been critical to my vision.”

Evaluations of Kindred’s work show that the bonds being formed at partner schools among parents from different racial, ethnic, and socioeconomic groups are leading to greater empathy, parent efficacy, and access to resources, and that parents are changing the way they behave with one another and influence the school.

An Urban Institute study on Kindred’s pilot showed that 100 percent of parents surveyed and participating in focus groups reported being more comfortable talking with parents of different races and socioeconomic levels, and 92 percent felt more confident that they could influence their children’s success in school. Equally high percentages responded that they had helped their children with an idea or a resource gained through a Kindred dialogue and that they felt responsible for addressing educational inequities at their children’s school.

And one key finding from a second external evaluation, conducted by Community Science, a research organization, showed that there is no “diminished effect” on building trust and community at the school when parents themselves lead the dialogue groups. The evaluation focuses on results from the 2017‒18 school year.

“Kindred is on the path to influence whole-school change as a result of changing how parents work together to advance equitable approaches in their schools, as well as how school administrations engage and work with families,” the report says.

Lessons learned and the road ahead

Kindred has now run more than 20 dialogue groups with over 260 parents across nine schools. The program will continue to grow in the 2019‒20 school year, and the organization will prioritize creating an online network for parents across schools to share ideas with each other. Kindred is also committed to sharing what it is learning with the broader education community.

“We are hearing ideas from parents that I have not heard anywhere else in the education landscape,” says Wilson Phelan. “For example, one set of Spanish-speaking parents organized their own WhatsApp group that led to parents giving each other rides to school on cold days. This kind of idea can be transformational in addressing stubborn barriers to attendance such as transportation, not to mention addressing the social isolation so many parents experience.”

To catalyze and grow in response to these potentially transformational ideas, Kindred has built into its program design a practice of rapid learning and improvement. As such, it continues to innovate and improve upon its model. Examples from the past year include:

In Kindred’s initial model, the first two years were dedicated to building a cohort of parents who would mobilize other parents across the school to devote their ideas, time, and resources to advancing equity. Kindred is finding that starting equity committees at the end of year one—instead of waiting until year two—better sustains the engagement of parents and therefore is now integrating this approach into the beginning of year two at new partner schools.

Kindred’s initial theory of change included only parents as the driving force of change. School principals familiar with Kindred’s work began asking the organization to develop a parallel staff dialogue experience. Kindred piloted this model last year at one school, and the results were similar to those Kindred had observed among parents. For 2019‒20, six schools have requested staff groups. Kindred anticipates that by working with staff directly, it will enable staff and parents to work together to advance equity within their school communities more quickly and effectively.

With Kindred’s growth came a significant interest among parents to learn from their peers at different schools. Parents in equity committees wanted to hear about how other parent leaders were addressing a range of challenges. As Kindred’s network grows both in D.C. and beyond, and as Kindred transfers at the end of the upcoming school year responsibility for the work to staff and parents at its first partner school, the organization is establishing an online platform for parents to be in direct connection with one another to share information, resources, support, and ideas.

In 2018, in response to demand that emerged among parents of color who participated in mixed-race groups, Kindred started affinity groups to allow black and Latinx parents to build trust within their own communities. It is well researched and documented that racism causes deleterious effects to physical and mental health, increases social isolation, and decreases response flexibility in parenting. Eliminating inequity requires that the experiences and ideas of parents who have experienced transgenerational trauma are incorporated into school design. Kindred is testing this model through its facilitation and support of racial affinity groups. 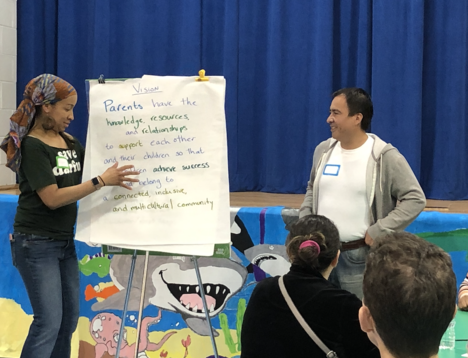 Parents at E.L. Haynes Public Charter School share the vision their parent group developed for educational equity at the school

Kindred is paving the way for a new type of family engagement that has not been practiced at scale to date, one that engages families together as change makers and co-designers of schools and school systems in collaboration with education leadership and school staff. Further, with an uncompromising focus on building increased racial consciousness among families that is actualized through anti-racist practices, Kindred is identifying ways to bring parents from a range of backgrounds and experiences into the problem-solving space as owners and champions of equity.

This work offers promising innovation regarding the role of families—led by parents furthest from opportunity—in shaping educational experiences and adding new ideas about making meaningful progress toward achieving educational equity.

“Kindred has changed the way that I engage with my children’s school. I now see that as much as I need our school’s services for my children, our school has needs of me,” Dixon says. “Our school needs my input, experiences, and perspective as a black father to create an approach that will work for more children. As more parents see this, we will create an educational experience that truly meets the needs of all children.” 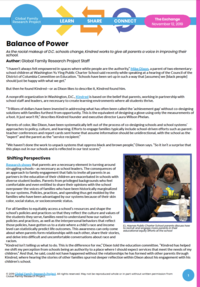 As the racial makeup of D.C. schools change, Kindred works to give all parents a voice in improving their school.