Home Articles Out of a Crisis, Districts Look to Post-Pandemic Shifts in Family Engagement

Out of a Crisis, Districts Look to Post-Pandemic Shifts in Family Engagement

All school districts and family engagement professionals have been forced to adapt the way they interact with and support families over the past year. As you read this piece, we hope you’ll reflect on these three questions and then share your stories with GFRP:

The Cajon Valley Union School District, northeast of San Diego, has long had parent liaisons, but it took a pandemic to realize the integral role they can play in student learning.

Last summer, the district’s Family and Community Engagement Department recorded hundreds of workshops for parents on Zoom — on everything from navigating Khan Academy to improving students’ grades in middle school. Instead of just directing parents to the list of options when school started in the fall, the district’s 16 liaisons. who come from the communities they serve, began hosting live Zoom sessions to introduce participants to the topics and answer their questions. The strategy have been popular during a time when opportunities for in-person interaction with staff at school is still limited.

Recorded in Arabic, Spanish, and Farsi, along with English, the videos — and the conversations — have been effective tools for maintaining contact with the district’s diverse population of families and allowing them to ask questions about remote learning, returning to schools and keeping students on track. The strategy is just one example of how Cajon Valley, and districts nationally, have adapted how they engage with families and plan to continue using new methods that have been successful during the pandemic.

“A hundred percent, no way are we going back to how we did it before,” Serban said, noting that family-teacher teams — a local twist on WestEd’s Academic Parent Teacher Teams —  have been another modification that the district will continue.

The virtual events include a brief student performance, like a song — a sure way to get parents to participate. But then teachers share some data and provide guidance on one thing parents can do at home to support their children’s learning. The sessions have been an opportunity to “just listen to the families,” Serban said, and not to overwhelm them with “all the things kids aren’t doing” in school during the pandemic. 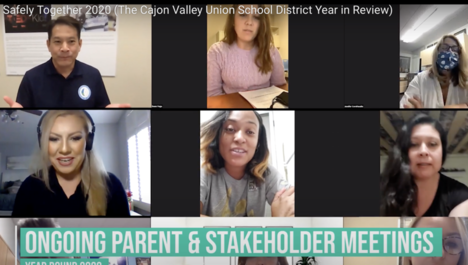 Other district leaders have also noted that the pandemic has pushed them into a new level of engagement with families and they have no plans to return to previous, one-size-fits-all models.

“Been thinking a lot about equity, access and the pandemic’s silver linings,” Julie Hackett, the superintendent of Lexington Public Schools in Massachusetts, tweeted earlier this year. “Why on earth wouldn’t we continue with Virtual Parent-Teacher Conferences, IEPs and Committee meetings if it increases family engagement and more members of our school community can participate?”

The district has also made parents a part of the reopening process, involving them on a “community input team” that meets every two weeks and enlisting them as volunteers to help students adjust to the being back in school with COVID-19 safety routines in place.

Other districts have shifted more attention to meeting students’ and families’ basic and mental health needs over the past year, increasing efforts to check in regularly with families and deploying staff members, such as bus drivers and office personnel, in new ways to strengthen relationships with students and parents.

The Ogden School District, in Utah, continued that level of support over the summer, knowing that the impact of the pandemic didn’t subside while students were out of school. The district conducts frequent surveys of students to measure social-emotional needs.

Aspen Florence, director of student advocacy for the district, recently told the Standard-Examiner that the contact with families over the summer led to higher attendance rates at schools in the fall — a lesson for this upcoming summer as well.

What They Have Gained

Keeping families with young children engaged has been especially challenging for districts. Many parents have opted to put off pre-K and kindergarten during the pandemic, recognizing that hours in front of a screen isn’t an ideal way for young children to learn.

Like most districts, the Jefferson Elementary School District, near San Francisco, transitioned its in-person “parent café” and playgroup sessions for a virtual format. But preschool teachers also individualized the program for families, emphasizing parents’ role as their child’s first teacher and modifying the program to fit children’s unique schedules and environments.

That sensitivity to the upheaval remote learning has caused in families with multiple children — along with delivering devices and hotspots to keep families connected — allowed the district to keep more preschoolers enrolled than likely would have been without that personalized approach, said Lisa Zimiga, director of child development for the district. Group Zoom sessions were available, but so were individual lessons with teachers, if that worked better for the family.

The connections between the families and the teachers have also shifted the focus toward individual milestones for children instead of concerns over aspects of the curriculum teachers weren’t able to cover.

“I'm sort of an optimist. I like to think of what they have gained,” Zimiga said about this past year. “We know students have learned other life skills, some were cooking more with family members, creating art and music, helping with chores around the house or listening to stories.”

Meanwhile, teachers have also been trained in working with dual language learners, which will help them serve the district’s diverse population now and in the future.

“We are able to build faster relationships with the kids and their families and it was easier to communicate with the adults since they were nearby during the sessions,” one teacher reported about the Zoom sessions. “It is nice to see how much progress the child makes on a weekly basis during our one-on-one or even in our small group sessions.  As difficult as it can seem to build social relationships with their peers, the children are always excited to see each other during whole group sessions and have learned to adapt to online learning a lot better than we could have imagined.” 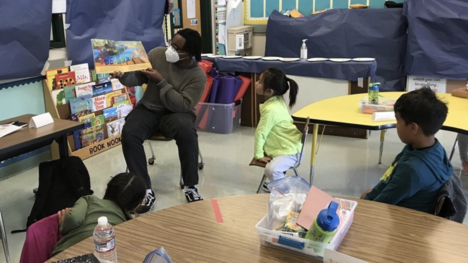 Schools that were already connecting families with resources, such as housing assistance and meal deliveries, have found an even greater demand for those services during the past year — and are perhaps demonstrating the value of the community school model to districts that have never considered such a strategy in the past.

The Akron Public Schools in Ohio, for example, has partnered with the United Way to run family resource centers and the LeBron James Family Foundation to offer financial counseling and even transitional housing.

Staff members who typically focus on the nonacademic needs can also be part of the academic recovery for students, as the Cajon Valley Union district’s experience shows. In addition to hosting the Zoom workshops, liaisons began meeting remotely with families who have English learners in kindergarten — children who have not yet mastered letter names or sounds. They gave the parents an activity to do with their child, including watching a video.

Liaisons have also been running small groups for older students in 4th and 8th grade at risk of becoming long-term English learners. While teachers are seeing growth in students’ language development with both models, Serban said the district had to “take three steps back” when some liaisons began to express that they were becoming less comfortable with the academic focus of their work.

Other liaisons, however, have felt “empowered,” Serban said, and are pursuing credentials in the education field. As part of the district’s World of Work initiative — focusing on career pathways for students — liaisons explain the curriculum to parents and hold workshops in the district’s middle school career centers. Serban said eventually the initiative would not only tap into students’ interests, but ideally link parents to job opportunities as well. The liaisons “would serve as career coaches for parents,” Serban said, “and help them realize their own strengths.”