Home Articles ‘In This Boat Together’: Despite COVID, Libraries and Families Develop Tighter Bonds

‘In This Boat Together’: Despite COVID, Libraries and Families Develop Tighter Bonds

When libraries shut down at the beginning of the pandemic, families lost an important place to interact with each other, where informal connections can be just as important to children’s success and well-being as organized programs.

And the Maryland State Library took the lead on ensuring library staff — many who were using virtual platforms, such as Zoom for the first time — were equipped to keep families connected to library services and to each other.

“We provided the tools to help people be successful,” said Carrie Sanders, youth services coordinator at the Maryland State Library. She noted that there was a mindset that, “We’re all in this boat together, and we’re going to help each other paddle.”

Dorothy Stoltz, director of community engagement for the Carroll County Public Library in Maryland, agreed that there was a “sandbox” approach to sampling new tools that “provided this foundation for intelligent risk-taking” in an effort to stay connected to families as much as possible.

While the relationships between parents and schools have been strained over the past year and a half — because of problems with remote learning or conflict over reopening protocols — connections between families and libraries have grown stronger as parents reached out for help to keep their children moving forward academically.

“Schools were so overwhelmed just trying to focus on instruction last year,” Sanders said. “We tried to fill in the gaps."

The Baltimore County Public Library, for example, organized panel discussions for parents on topics such as lessons from homeschooling, warning signs of depression in children, and setting up a space for children to learn at home. And the Anne Arundel County Public Library provided resources on learning at home, hosted homework help programs, and gave students access to YouTube videos for learning that were blocked on school-issued laptops.

Now, nearly two years into the pandemic, and as libraries work toward resuming normal operations, many library leaders and children’s services staff are holding on to some practices that were born out of necessity during peak periods of isolation for families. Here are a couple examples:

The Prince George’s County Memorial Library System prepared and distributed grab-and-go STEM and art kits to support at-home learning. In other parts of the country, including Little Rock and Chicago, such activity kits are now a routine part of library services and viewed as one way libraries are evolving for the future.

“Families continue to ask for these kits, and library staff continue to provide, as much as possible,” Sanders said.

During lockdowns, library staff members would drop off kits at children’s homes, if needed,  or hand them out as families drove to the branch. Instead of feeling impersonal, curbside service, Sanders said, has been an opportunity to deepen relationships with families.

The Baltimore County system even created a take-home kit that encouraged children to get outside and away from their screens — complete with a jump rope, chalk, a ball, and instructions on how to play games.

“Libraries stretched themselves in new ways to achieve this type of programming,” Sanders said. Many staff members had to learn how to use new equipment to amplify voices outside or use library acreage and facilities in new ways. They also strengthened or forged partnerships in their communities to provide outdoor programming in unique outdoor spaces, such as amphitheaters, state parks, museum grounds, park gazebos and garden centers, Sanders said. 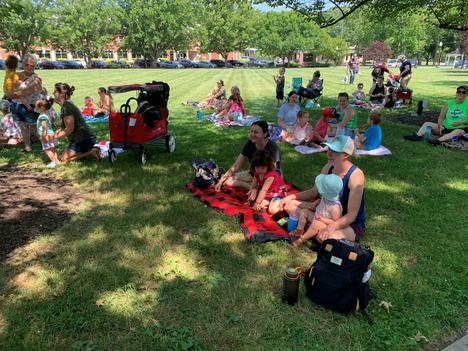 All of these efforts to support parents and grandparents in their expanded role as at-home teachers have only created tighter bonds between library staff members and families — despite being “physically separated from each other over much of the past many months,” Sanders said.

She shared some comments that a librarian expressed in a survey about returning to in-person story times after a year on remote-only interaction.

“We were able to accommodate larger groups than we would have indoors, often getting attendance of over 100 people. Our librarians used the opportunity to innovate and collaborate in providing larger-scale formats for their stories, such as acting out stories and utilizing puppets,” the librarian wrote. “Several customers were able to connect with librarians who were featured in our virtual story times. After a year only being able to interact with our adult customers via the phone and drive thru, it was a delight to interact with children again."

Our latest update includes lots of resources that showcase the role of libraries in family engagement. Why do you l… https://t.co/XHqR8wB4nT

Learn how the COVID-19 pandemic prompted libraries to lean into their role as public health partners! #PublicHealth… https://t.co/SgRY6IO8RG