Our latest blog post highlights how the Friday Café model is connecting family-focused practitioners in Connecticut, California, and beyond.

When Judy Carson, program manager for School-Family-Community Partnerships at the Connecticut State Department of Education, was describing the work that parent coordinators do in their schools, she was asked: “Who are they and what do they do?”It was that question that prompted her to bring some 25 to 30 of these professionals together to see how she might support them. “The thing that came out the strongest was how much they liked being together,” Carson says. 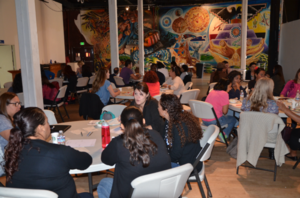 Parent engagement coordinators, liaisons, specialists, and those who hold similar titles can be somewhat isolated because they are typically the only person in that role in their schools or organizations. Carson began developing a structure to allow them to continue meeting, inspired by an artist-run network called CreativeMornings, which began in Brooklyn and has now spread to over 170 sites throughout the world.

The first official Friday Café gathering in Connecticut was in the fall of 2014. The concept was developed in partnership with the Capitol Region Education Council, the State Education Resource Center, and the state’s Parent Information and Resource Center. Carson planned for about 12 participants, but at least 50 people attended and there weren’t enough chairs for everyone. She thought, “We’re on to something here.”

The meetings are based on a few key values, such as modeling good practices, that family engagement professionals can use with families, making information available in multiple ways and taking a strength-based approach. At one of the early gatherings, one attendee commented, “Now I know I’m not alone.”

With eight meetings a year, each event is a peer-to-peer exchange with a practitioner who gives a TED Talk–style presentation on a theme chosen for that meeting. Trust was the topic for the first gathering. Other areas for discussion have included mindfulness, parent voice, community organizing, and using music as a bridge across cultures and languages. An upcoming event will focus on comedy improv, “because a lot of this work is improvisational,” Carson says.

The sessions are held in different parts of Connecticut and typically take place in non-governmental sites, such as museums,

historic venues, and even a carousel room at the zoo, sparking ideas for participants on where they could hold events for parents, Carson says.

The program runs on a “shoestring budget,” she says, adding that some events have been sponsored and 21st Century Community Learning Center program funds have also been used to cover the cost of activities.

In addition to schools, Friday Café participants represent community-based agencies, higher education, and increasingly, libraries. The meetings also attract those who might not hold a family engagement position but are equally interested in the topic, such as principals, superintendents, other central-office personnel, social workers, and even curriculum specialists.

“Being new in my position it has been wonderful to network with other people from all areas across the state,” says Patricia Moran, who became the supervisor of family and community engagement for the Waterbury Public Schools last August and previously was supervisor of early childhood education for the district. “Topics for each session have been very informative, relevant, and timely. I can take information away, tailor it to my district’s needs, and implement it the next day.”

A recent report from the Council of Chief State School Officers highlighted Friday Café as a promising practice for creating greater educational equity. Outside of Connecticut, Friday Café networks have spread to San Diego and San Mateo, California, where Soodie Ansari, the coordinator of early-learning dual-language support for the San Mateo County Office of Education works in partnership with the Peninsula Conflict Resolution Center to coordinate the monthly gatherings. San Mateo’s Friday Café also received a two-year family engagement grant from First 5 San Mateo, which supports renting the venues, refreshments, marketing efforts, and resources for the meetings.

“We have worked hard on creating a restorative experience for the participants and we continue to hear feedback that indicates we’ve hit the mark on this goal,” Ansari says. “In the words of one of our attendees: ‘Arrived feeling stressed and felt relief and release once here!’ The participants clearly get a lot from peer support during the cafés as well as self-care—both of which will support them in refueling before going back to their jobs, which can be intense and oftentimes lonely.”

Friday Café spread to San Mateo and San Diego after professional colleagues heard about the model during a session Carson led at the National Family and Community Engagement Conference, organized by the Institute for Educational Leadership (IEL).

“We were drawn to the idea of connecting family engagement professionals to each other,” says Eyal Bergman, the family and community engagement officer for the Cajon Valley Union School District in San Diego County. “It fills an important gap.” 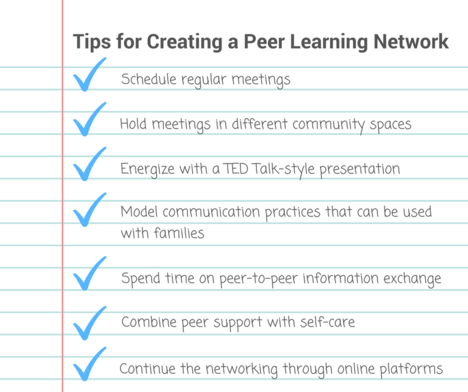 Those who work in schools, he adds, are often surrounded by educators and leaders who participate in professional learning communities and talk about the importance of collaboration, but “don’t have their own network.”

Instead of Bergman planning all of the gatherings, San Diego’s Friday Café has a steering committee with members who rotate the responsibility for choosing the venue, inviting speakers, and ordering food. Locations for meetings have included the shores of Mission Bay; Olivewood Gardens and Learning Center, which teaches healthy eating through organic gardening; and Bread & Salt, an experimental art center.

Connecting in person and virtually

This spring, Carson has added another feature—a monthly webinar series on high-impact family engagement practices, such as home visiting and Academic Parent-Teacher Teams—especially since the Every Student Succeeds Act requires schools to use evidence-based practices. While the in-person meetings focus on “shifting mindsets and connecting” with each other, Carson says, the webinars are intended to be more informative.

The theme of the April 20 was “How Welcoming Is Your School? Creating a School Culture That Invites Family Engagement.” And beginning with the March 23 webinar, the meetings are accessible online as well. The May topic is “Family-Friendly First Impressions: Front Office, Safety, and Support Staff as Partners in Family Engagement,” and June’s subject is “Linking to Learning: Bringing Families into the Learning Process and Launch of Summer Book Club.”

Friday Café is “a really unique and innovative way to bring together folks from a variety of vantage points committed to improving family engagement,” says S. Kwesi Rollins, the director of leadership programs at IEL. “The more Friday Cafés, the better.” 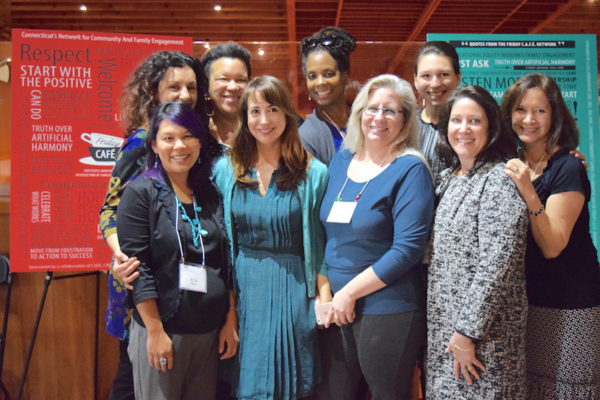