Math educators and out-of-school-time providers collaborating on how to develop mathematical thinking in young people is just one example of how a cross-sector partnership in Cambridge, Massachusetts, is tackling opportunity gaps — and changing the community’s mindset toward math.

The work is part of Math Matters for Equity, a citywide effort to increase math literacy among Cambridge students, with a special emphasis on increasing math-related opportunities both in and out of school for black students and those from low-income families.

Led by the Family Policy Council, the campaign emerged when council members asked Cambridge Public Schools superintendent Kenneth Salim where the broader community could be the most helpful, explains Rosalie Rippey, communications director for CPS.

“I think that nonprofit and city programs are able to be more nimble in adopting changes than school districts,” Rippey says. “Public schools are under an incredible amount of pressure to respond to the demands of state requirements and local political pressures.”

The campaign also demonstrates the role city agencies and community partners have in addressing the student learning goals schools and families often can’t reach on their own—particularly in science, technology, engineering, and math (STEM). With art as an additional focus, Cambridge also uses the STEAM acronym.

Across the country, children’s cabinets and a variety of partners engaged in STEM fields are finding innovative ways to support students’ learning outside of the classroom.

“Nurture young people’s ‘STEM identity,’ or self-perception of competence in STEM,” urges the STEM Funders Network in describing this type of work. “STEM Learning Ecosystems can do this by engaging them in challenging, relevant problem solving on issues they care about; publicly recognizing them for their efforts; and helping their parents and guardians support their pursuit of and interest in STEM.”

In another Massachusetts example, city leaders in Somerville — as part of the Harvard Education Redesign Lab’s By All Means initiative — are collaborating with nonprofit Breakthrough Greater Boston, to give middle school students access to fun physics experiences during the summer.

“As part of their collective work, Somerville’s leaders determined that improving access to quality out-of-school learning is a key driver of success for their city and started to build partnerships to make this aspiration a reality,” according to a summary of the effort.

“Equity Matters for Everything”

In Cambridge, the goals of Math Matters for Equity include raising public awareness about the importance of math and focusing on improving specific student outcomes. The first objective is increasing eighth graders’ scores on the math portion of the Massachusetts Comprehensive Assessment System (MCAS). 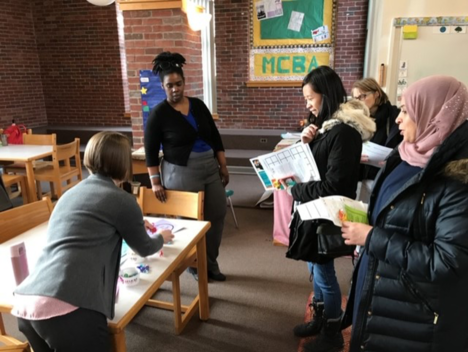 A gathering for preschool and kindergarten parents to learn about ways to support their children’s learning is one example of the impact of Math Matters for Equity.

The council launched the effort after a retreat last summer involving a variety of school and community partners. One of the first steps they took was to hear from those already deep in the work of creating math learning opportunities for all students.

They invited Maisha Moses, executive director of the Young People’s Project (YPP), and her father, Algebra Project founder Bob Moses, to speak about their work. YPP trains high school students as “math literacy workers” and runs the “Flagway” game in which teams of students compete against each other following rules based on a mathematical theory called the Möbius function.

The two shared about Math Literacy for All: We the People, a growing alliance of organizations across the country focusing on math equity. The alliance received planning and launch pilot grants through the National Science Foundation’s INCLUDES initiative, which aims to broaden opportunities in STEM for underrepresented populations nationally.

“It was heartwarming to hear that they wanted to focus on math,” Maisha Moses says, adding that the alliance’s value statement also influenced the development of the council’s core values for the math equity work. “The idea that really resonated with people is that math shouldn’t be an obstacle for anybody’s learning or future work.”

Nancy Tauber, executive director of the council, said members have even considered flipping the name of the effort after taking a closer look at what they are hoping to achieve.

“If we don’t focus on the equity issues, we will not be able to reach our math goals,” Tauber says. “It’s really ‘equity matters for everything,’ but for now we will focus on math.”

It wasn’t long, however, before Tauber learned just how sticky a subject math can be.

“I had people cry when I just asked them about math,” she says. “If you want to clear a room very quickly, say math and MCAS in the same sentence.”

But trepidation toward math among parents can influence how children perceive their own skills, and Tauber sees families as an essential component of reaching the campaign’s goals.

“Empower families to have the necessary confidence to incorporate math in everyday life, help their children enjoy math, and advocate for their students’ academic success in math,” says one of the objectives in a two-page document on the effort.

CPS, for example, already holds math curriculum nights, but Tauber wants to make sure all families are represented, “not just the ones that usually come.” Collaboration between educators and out-of-school-time providers is another goal.

In addition to focusing on math competencies and outcomes among middle schoolers, the Family Policy Council also sees early childhood as an optimal time to “improve mathematical thinking” even before children start kindergarten. 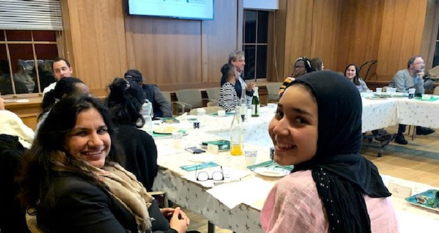 Discussions about the math equity effort — and even opportunities to work on a math challenge — now take place at Family Policy Council meetings.

The school district’s Birth to 3rd Grade Partnership, for example, will include math topics in the professional development sessions it provides for early educators, and the district math coach is beginning to build bridges with the early childhood education community as well. Incorporating math activities into home visits will be another opportunity to support families in incorporating math into everyday activities.

“We’re looking at what’s happening and how we could incorporate math into it and be more intentional,” Tauber says.

In the early childhood sector, the equity initiative has also sparked the development of an additional effort by the Agenda for Children Literacy Initiative — an intermediary and public-private partnership — to engage parents and caregivers in supporting young children’s literacy development. Agenda for Children Literacy organized an event for both kindergarten and preschool families at an elementary school in the district.

Math is now a regular topic for Family Policy Council meetings, and the school district’s math coach kicks off monthly meetings with a math activity as a way to further spread awareness of how math is part of everyday life.

“I think that we should not underestimate the impact of opening up these conversations,” Rippey says, “and trying to demystify mathematics within the [out-of-school-time] community, while helping mathematics educators think about ways to make learning more culturally responsive, inclusive, and responsive to youth development insights.”

Cambridge Agenda for Children’s Stories of Family Partnership offer a new approach to building capacity within the out-of-school-time community.

We want to know: How are you shifting the paradigm to help families support their children’s learning? Reply below. https://t.co/SsFEOMuhMl

The kids are working so hard and I know the teachers and parents are. We’ve just got to shift the paradigm a little… https://t.co/WC5Xr1yt05